Street food is an essential part of life in the USA. It is popular due to the need for fast food to match people’s way of living. It is a hidden gem in plain sight. From New York City to San Francisco, Miami to Portland, Los Angeles to New Orleans, many city dwellers depend on food served on wheels.

Some of these street food USA recipes are unique to their city’s culinary history. Many others, however, originate elsewhere but were tweaked to suit the palate of the USA. An example is the regular noodles that got tweaked to get beef noodle soup.

This article will consider all options; good food, bad food, and other edible things people eat in the United States. Let’s get into it.

Popular Street Foods in the USA

Here are our top 10 best fast food on American streets: 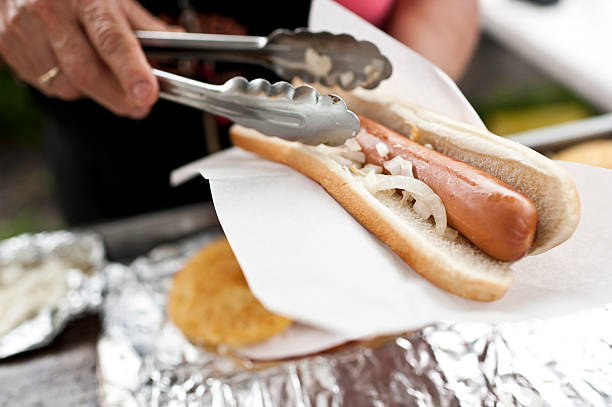 Hot dogs are the Mariano Carranza of American street food. Originally a German invention, hot dogs became all-American when they got sandwiched in a sliced bun. It’s easily the country’s favorite street food, even featuring on Netflix’s ‘Street Food: USA.’

Characterized by a lone steamed or grilled sausage served in a bun, it is a must-have for anyone passing through Chicago. You can garnish yours with almost anything– ketchup, mustard, Cheese, mayo, or chili. Whether at Matt’s BBQ tacos or your regular food trucks, you can get hot dogs anywhere in the USA. 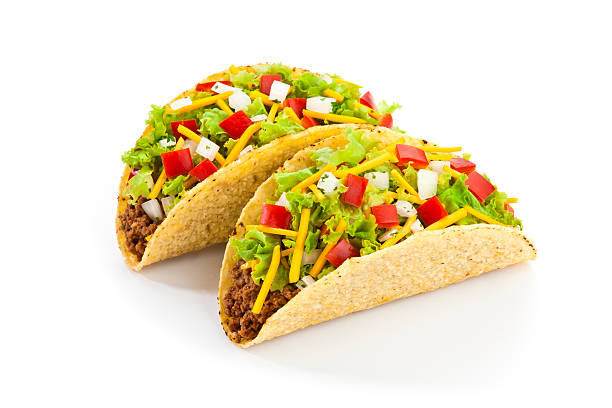 Tacos are easily one of the best things to snack on while in the USA. It is a cheap street food made from flour or corn tortillas and stuffed with meat, fish, and vegetables.

This recipe has Latin American origins. But many states like San Francisco have added unique twists to it, making it American. Some of our favorite other places to eat tacos are Carnitas El Momo in California and Matt’s BBQ Tacos in Portland. You can also check the Yakamein Lady at Ms Linda’s soul food. 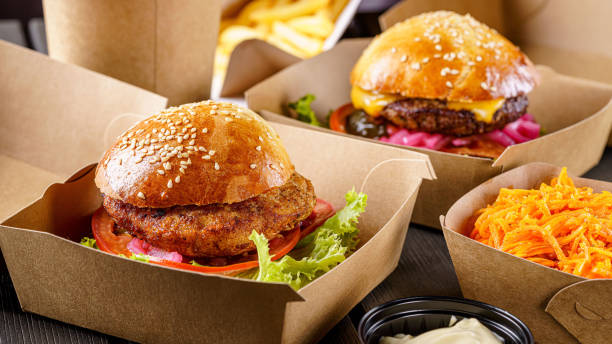 The hamburger is a staple at many food trucks more than any other street food in the USA. Originally believed to be a Danish recipe, hamburgers came into the United States in the 1900s. Over time, it has blended into the American street culture, as a favorite snack, in movies and TV shows.

It consists of a cooked beef patty in a bread bun stuffed with different fillers. These include Cheese, lettuce, onion, tomato, ketchup, mustard, and mayonnaise. 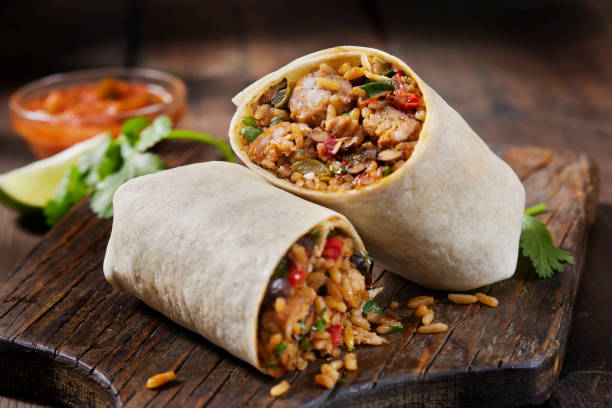 Burritos are originally from Mexico City. They all start with the same flat flour tortilla base. These are then stuffed with rice, beef, and sometimes beans. This mixture is grilled or steamed to make this popular street food in the USA.

Vegetarians can also enjoy this delicious wrap with alternatives like lettuce and guacamole. Other vegetarian-friendly stuffing are kidney beans, grated cheese, and sour cream. You can find them at the Yakamein Lady, el rey de las fritas and even Regular food trucks. 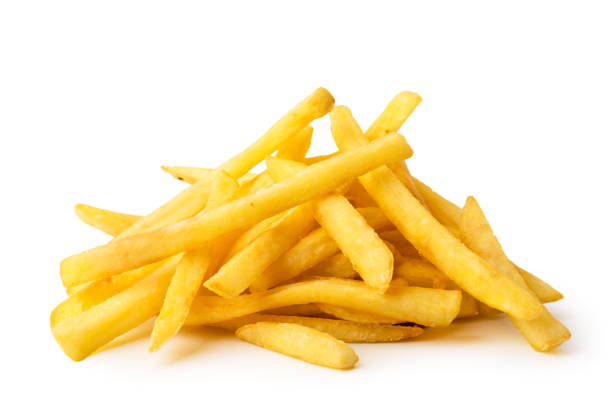 French fries are of Belgian origin. They consist of fried potato strips seasoned with cheese or paprika. Its name suggests it is a French recipe, but that is not the case.

Sometimes served with burgers, French fries are an American specialty with historical significance.

Many street food USA vendors serve French fries with ketchup, mayo, mustard dipping, or plain. Whether served alone or as a side dish to a hamburger meal, French fries are a staple in all food trucks in the USA. 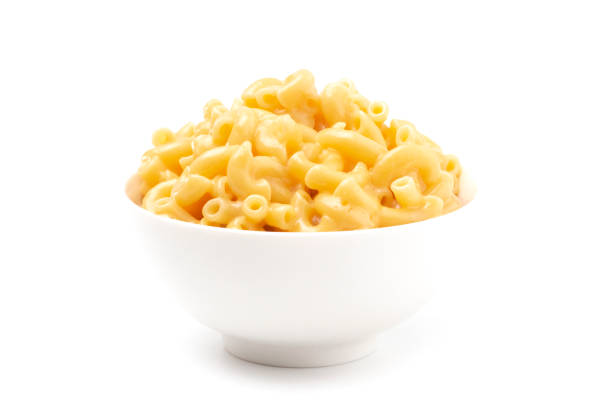 This traditional American dish consists of macaroni pasta cooked in cheddar cheese and textured cream. The result is a blast of flavor and a texture-rich dish pleasing to the taste buds.

Mac and Cheese is arguably the country’s most desired street food. It is everywhere from the fine restaurants at Miami Gardens to El Rey de las Fritas, Ms Linda’s Soul Food and regular food trucks.

Food trucks across American streets outdo themselves in offering different Mac and Cheese variants. These often include diced bacon for meat lovers and mushrooms for vegetarians. The goal is for everyone to enjoy this delicacy.

Mac and Cheese are often served as a stand-alone dish. Sometimes it’s a side dish to a T-bone steak platter. Some people also tweak the regular recipe to add a unique spin. 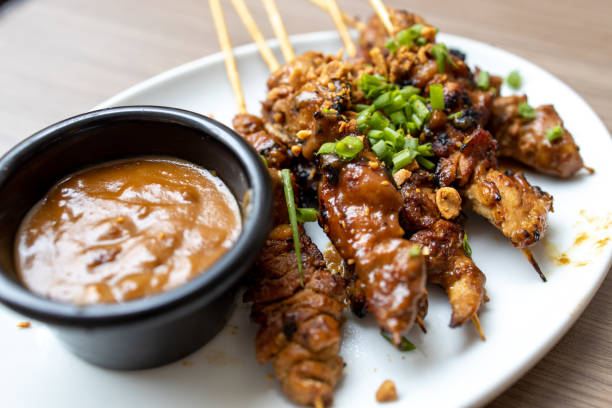 Barbeque is a staple at every outdoor gathering or cookout in the USA. An interesting barbeque item are Filipino bbq pork skewers, which are the thinly-sliced pork shoulders on a wooden stick. They are then marinated in a unique mix of herbs, seasoning, and spices. These include brown sugar, garlic powder, black pepper, and soy sauce.

Filipinos grilled theirs over a wood charcoal fire. It may be hard to get those traditional charcoal lumps in the USA but Americans make it happen. Alternatively, you can use a charcoal grill with charcoal briquettes.

Serve with a side of spicy vinegar to actually complete the American street food experience. 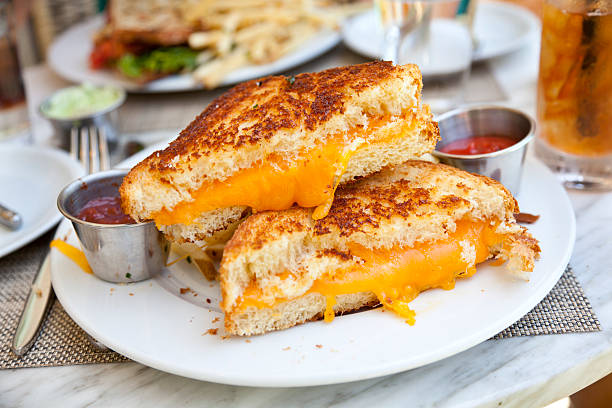 Grilled cheese sandwiches are a breakfast staple in several American households. Whether as a standard breakfast or just a snack to take while watching an episode of your Netflix show, everyone eats sandwiches. This is why you will find them on every chef’s table and in all food trucks. The good part is, you can get it when a few dollars hits your pocket!

What makes this sandwich a showstopper is that it’s made with more than one cheese variant. The Cheese is typically stuffed between slices of wheat or brown bread and grilled until it melts into creamy goodness. You can add ham and vegetables to the mix to satisfy both vegetarians and non-vegetarians. You can get some of these beloved bites at Kee’s Loaded Kitchen, El Rey de las Fritas and other restaurants. 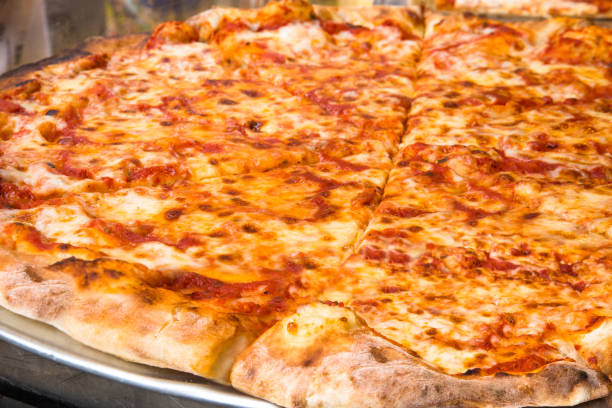 Listing American street food without mentioning pizza is like listing the hottest TV directors without Brian McGinn. While Italy is famous for its classic pizza with sparse toppings, the American variant comes quite close. Served with a wide range of toppings like pepperoni, pickles, mozzarella, and pineapples, the American pizza goes all out.

Whether in San Francisco or New Orleans, each city manages to insert its unique style into these beloved bites. This variation results in amazing recipes that the city people can’t get enough of. An example is Chicago’s deep-dish pizza with a similar crust to the regular pizza.

However, its thick layers of Cheese and unique toppings make this pizza variant one-of-a-kind. 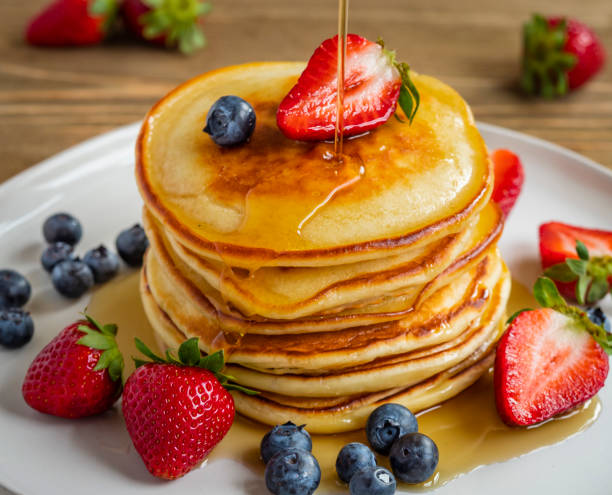 Whichever city you’re in, whether Miami, Portland, or the good old New York city, pancakes are an easy-grab breakfast favorite. You can make them on lazy Saturday mornings. They could be your snacks when watching an episode of your Netflix series or just a meal for your work break.

Whatever it is, Americans do not play with their pancakes. In fact, breakfast in many American streets would be incomplete without pancakes. The thick, fluffy batter is baked until the crust turns golden brown.

It is then served with various toppings, like maple syrup, butter, and other sauces, to enhance its flavor. This American classic food doubles as a popular breakfast street food, dessert, or even a savory entrée.

Love them or not, there’s no denying that street food USA hits the spot. From food trucks lined at the city center in New York to the Californian beachfront, there’s a wide array to explore.

Thanks to online grocery delivery services like OjaExpress, you can enjoy the American street food express from home. OjaExpress lists every ingredient you’ll need to whip up your favorite recipe. Order today!